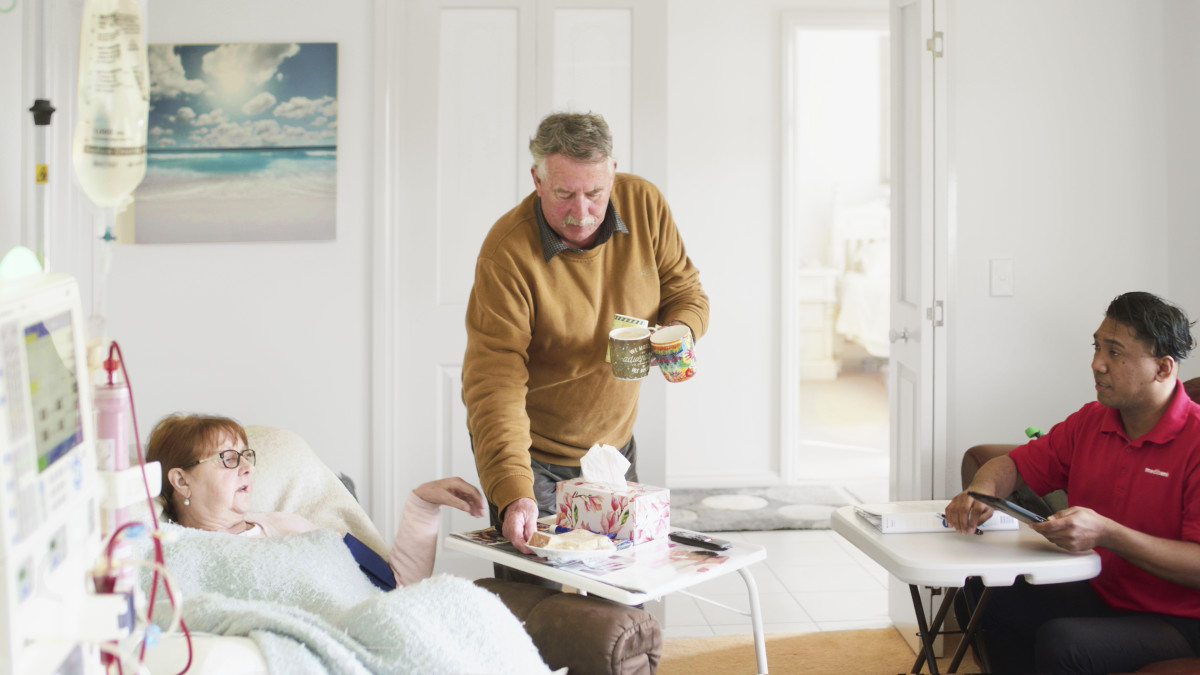 The number of dialysis at home services provided to Medibank customers has increased by 88%, with a 77% spike in new enrolments since February, driven by the COVID-19 health emergency.

On any given weekday, around 45 Medibank customers are now receiving haemodialysis at home instead of hospital, representing the highest enrolments since the trial started two years ago.

There was also an 102% increase in Medibank customers receiving chemotherapy treatment and medical infusions at home between February and July 2020.

The Medibank at Home service is a group of trials and programs – including chemotherapy and medical infusions, haemodialysis, palliative care and rehabilitation – giving eligible customers the choice to receive treatment in their own home, instead of hospital.

For clinically suitable Medibank customers, these services are delivered in the customer’s home at a time that suits.

Medibank understands that when it is clinically appropriate, at home care can deliver a superior patient experience. For many customers it’s more convenient, reducing the travel for patients who need regular treatment. We want to give our customers choice, including the flexibility to have nurse-delivered treatment in the comfort and familiar surroundings of home.

Typically, people who require haemodialysis spend an average of four to six hours in hospital for dialysis treatment, three to four times each week.

“It’s not difficult to imagine the burden this puts on individuals and their families,” said Dr Swan.

Before this, Yvonne’s husband Leigh would drive her 40 minutes each way from their regional Victorian home to a Geelong hospital for treatment. Including the haemodialysis and prep-time, it was often a six hour round trip, three times a week.

Yvonne said treatment at home was much more convenient.

“The renal nurse Jeff would come to our home three times a week. We trusted each other. Being treated at home also helped clear my mind. With one-on-one care, I could talk openly to Jeff in the privacy of home.”

There was also a lot of anticipation and stress prior to treatment at hospital. I was often up at 5.30am for the travel if I was the first group session of the day. I’m also highly immune-supressed. Being there so often, I was concerned about being exposed to hospital borne infections. With in-home treatment, there was flexibility and choice over when and where I receive my care.

Yvonne developed kidney disease at 40, with Leigh her carer ever since. Kidney disease can only be managed and can’t be cured. In July 2020, Yvonne received a kidney transplant.

“The effect of haemodialysis on the body is as gruelling as running 10 laps of a football field. That’s especially hard for someone in their late sixties.”

The grandmother of two young boys said being treated at home improved the couple’s quality of life, since she could rest immediately after her treatment.

“I felt less fatigued, with several more ‘good days’ where we could be a normal family. Dialysis fitted into our lives, rather than the other way around. Leigh is also playing golf again which is a bonus too.”

For patients to be treated at home, they need to be stable with a referral from their treating specialist (nephrologist). A home suitability assessment is done by Medibank’s provider, Dialysis Australia, and the treating hospital.

About Medibank at Home:

To find out more about Medibank at Home including eligibility, visit the website or call the Medibank at Home team on 1300 733 338 between 9am and 4pm AEST, Monday – Friday or email medibank.home@medibank.com.au

Medibank’s Rebab at Home program is available nationally, with chemotherapy, dialysis and palliative care trials only available in selected areas.

Dialysis is a treatment for end stage kidney disease that removes the extra water and waste products from your blood. A dialysis machine cleans your blood and performs some of the work that your kidneys would usually do.